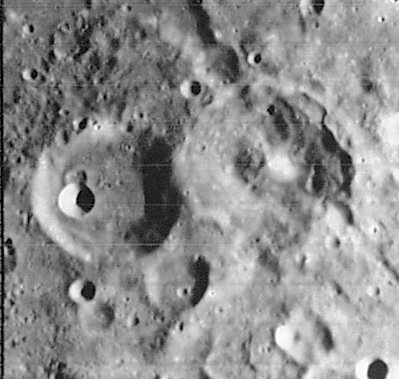 LOIV 072 H3
Isidorus is on the left, Capella is on the right.

LPOD Photo Gallery Lunar Orbiter Images Apollo Images
- Certain regions on the moon's surface don't look quite "lunar like", such as the high albedo streamers on the inner slopes of satellite crater Isidorus D. One such bright streamer, at LON: 34.13, LAT: -4.34, is worthwile to investigate on the LRO's ACT-REACT Quick Map. - DannyCaes Jun 18, 2011

(IAU Directions) ISODORUS.--The rampart of this fine ring-plain, which is of about the same size as Capella, rises at a peak on the E. to a height of more than 13,000 feet above the interior, which, except a small bright crater at the foot of the W. wall and a smaller one adjoining it on the N., contains no detail. The region between Isodorus and the equator includes many interesting objects, among them Isodorus b, an irregular formation open towards the N., and containing several craters.