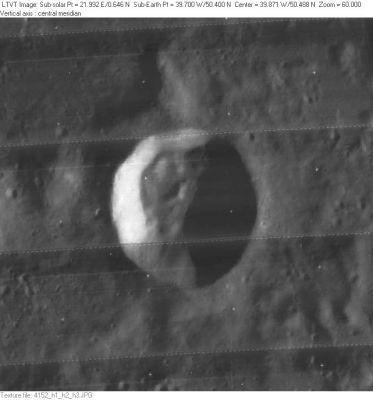 LO-IV-152H The isolated peak to the west of Foucault was once known as Foucault Gamma, the larger boomerang-shaped one to the north has never been named.

(IAU Directions) FOUCAULT.--A bright deep ring-plain, about 10 miles in diameter, lying W. of the mountains fringing the Sinus Iridum, between Bianchini and Harpalus. A very lofty peak rises near its N. border, and, according to Neison, it has a distinct central mountain, though neither Madler or Schmidt show any detail within.