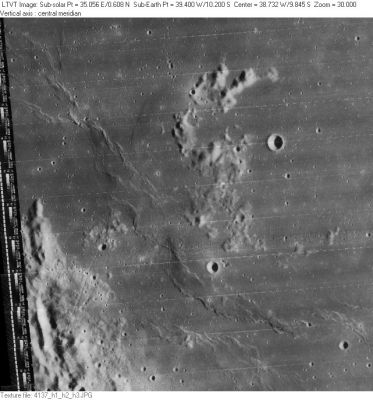 LO-IV-137H The Dorsa Ewing defined by the position and diameter given above (taken from the on-line IAU Planetary Gazetteer) extends from the upper left to the lower right of this Lunar Orbiter image. LTO 75C1 suggests it should include an additional ridge to the southeast (well outside the present view). The 4-km circular crater in the upper right (to the west of the unnamed hills) is Scheele. The slightly smaller crater to its southwest, near Dorsa Ewing is Letronne C. The pattern along the left margin is calibration data. To its right, the mountainous area is the east rim of Letronne.

Parallel Ridges (note: the portion of Dorsa Ewing shown above is in shadow in this LPOD)