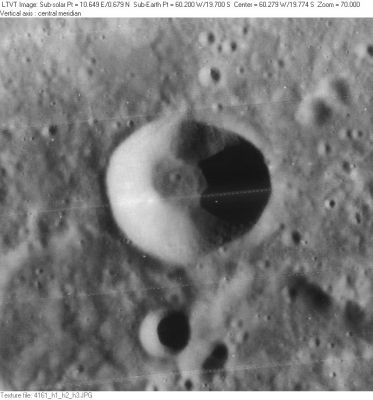 (IAU Directions) DE VICO.--A conspicuous little ring-plain, about 9 miles in diameter, with a lofty border, some distance W. of Mersenius.

Francesco de Vico (May 19, 1805 – November 15, 1848) was an Italian astronomer at Vatican Observatory, and also a Jesuit priest. He discovered or co-discovered a number of comets. He independently discovered the comet (C/1847 T1) that brought fame to Maria Mitchell as "Miss Mitchell's Comet", two days after she did. The news didn't reach Europe before Father De Vico announced his observation, so it was initially named for him. He received the award from the Danish king, who had offered a prize for the first comet discovered through a telescope (prior to this time, all comet discoveries were ones that could be seen by the unaided eye). Mitchell was later recognized and awarded a medal as well. He also made observations of Saturn and the gaps in its rings (he was the first to see the narrow division in the rings of Saturn now known as the Keeler Gap after James Keeler).