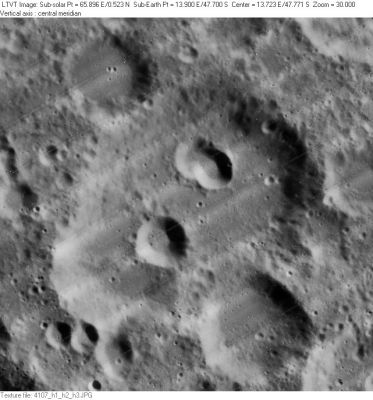 (IAU Directions) CLAIRAUT.--A very peculiar formation, about 40 miles in diameter, S. of Maurolycus, affording another good example of interference and overlapping. The continuity of its border, nowhere very regular, has been entirely destroyed on the S. by the subsequent formation of two large rings, some 10 or 12 miles in diameter, the more westerly of which has, in its turn, been partially wrecked on the N. by a smaller object of the same class. There is also a ring-plain N.W. of Clairaut, which has very clearly modified the shape of the border on this side. Two craters on the floor of Clairaut are easy objects.

Alexis Claude de Clairault (or Clairaut) (May 3, 1713 – May 17, 1765) was a French mathematician and thinker. He was a prodigy — at the age of twelve he wrote a memoir on four geometrical curves and under his father's tuition he made such rapid progress in the subject that in his thirteenth year he read before the Académie française an account of the properties of four curves which he had discovered.