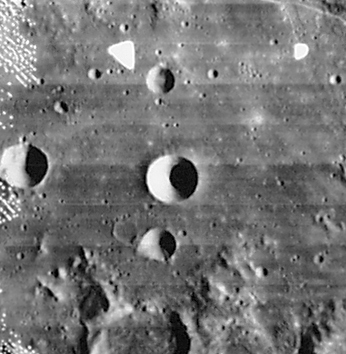 LOIV 090 h1 Cayley is the crater in the center. Below it is 10-km De Morgan followed by 30-km D'Arrest (partially visible along the lower margin). The 13-km crater to Cayley's left is Whewell. Above Cayley is 8-km Ariadaeus B with Whewell B (3 km) and Whewell A (4 km) to its west. 4-km Dionysius B is the little pit with its wall catching the Sun halfway between Cayley and the lower right corner.

LPOD Photo Gallery Lunar Orbiter Images Apollo Images
- Frame 2059 (made by Lunar Orbiter 2) is the first image of a series which show Ariadaeus B (north of Cayley) and a cluster of craterlets east of Ariadaeus B (see: the following images after 2059).
- Although there's nothing in the LPI's search list for orbital Apollo photographs of Cayley and nearby craters De Morgan, D'Arrest, and Whewell, these craters were captured on several frames of Apollo 16's north-looking metric/mapping Fairchild camera, such as frame AS16-M-0831. In this frame, Cayley and its surrounding craters are visible near the central part of the curved horizon.
- Research Lunar Orbiter 2 and Apollo 16 photography: Danny Caes

(IAU Directions) CAYLEY.--A very deep bright crater, with a dark interior, N. of De Morgan, and more than double its diameter. There is a second crater between this and the cleft.

Arthur Cayley (August 16, 1821 - January 26, 1895) was a British mathematician. He helped found the modern British school of pure mathematics.
Note:
See also the informal name Cayley Plains on Chart 12 in the 21st Century Atlas of the Moon (on Chart 12, the Cayley Plains are not at all near Cayley, they're near the landing site of Apollo 16 north of Descartes, hence that other informal name Cartesio-Cayley zone?). - DannyCaes Aug 15, 2015