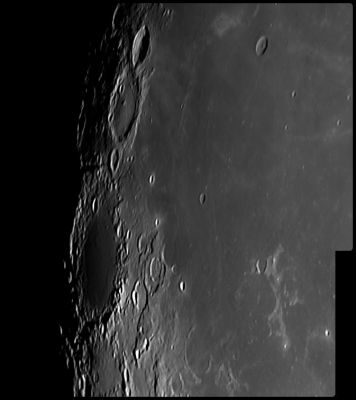 Peter Lloyd Cavalerius is at the top of the image (the crater with the deep shadow). South of it are Hevelius, Lohrmann, and Grimaldi.

(IAU Directions) CAVALERIUS.--The most northerly member of the linear chain, a ring-plain, 41 miles in diameter, with terraced walls rising about 10,000 feet above the floor. Within there is a long central mountain with three peaks. Under a high light the region on the E. is seen to be crossed by broad light streaks.

- Bonaventura Francesco Cavalieri (Cavalerius) (1598 - November 30, 1647) was an Italian mathematician known for Cavalieri's principle, which states that the volumes of two objects are equal if the areas of their corresponding cross-sections are in all cases equal. Cavalieri developed a "method of the indivisibles," which he used to determine areas and volumes. It was a significant step on the way to modern infinitesimal calculus. He was introduced to Galileo through academic and ecclesiastical contacts. Cavalieri would write at least 112 letters to Galileo. Cavalieri also constructed a hydraulic pump for his monastery and published tables of logs, emphasizing their practical use in the fields of astronomy and geography.
- Rima Cavalerius B (a curious rille seeker's name for the rille on the floor of Cavalerius B).
- Rima Cavalerius D (a name from an amateur explorer of the lunar surface for a rille on the floor of Cavalerius D).