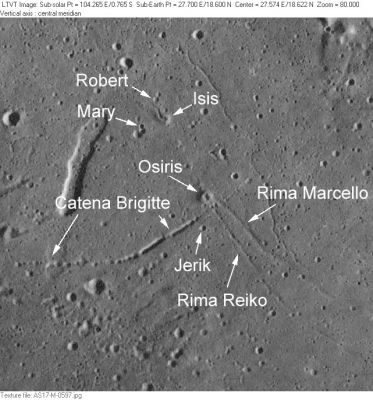 AS17-M-0597 This small area northeast of Dawes, on the border between Mare Serenitatis and Mare Tranquillitatis, is densely populated with minor feature names because it was plotted on two of NASA's high-resolution Topophotomaps. The upper group of Robert, Mary and Isis appears on 42C3/S1 and the lower group of Osiris, Catena Brigitte, Rima Marcello, Rima Reiko and Jerik is on 42C3/S2.