Dawes, with Rima Dawes slightly east-northeast of it 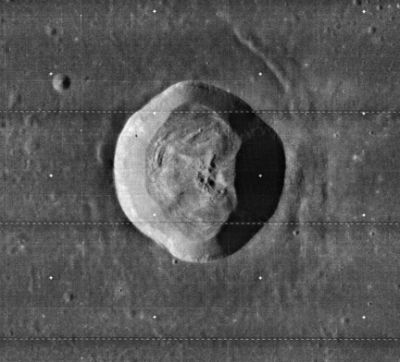 LO4-085-h2
The "bow-shock" slightly east of Dawes is the formation officially known as Rima Dawes.

(IAU Directions) DAWES.--A ring-plain 14 miles in diameter, situated N.E. of Plinius, on a nearly circular light area. Its bright border rises to a height of 2,000 feet above the Mare, and includes a central mountain, a white marking on the W., and a ridge running from the mountain to the S. wall. There are two closely parallel clefts on the N. side of the plateau running from W. to E., that nearer Dawes being the longer, and having a craterlet standing upon it about midway between its extremities. At its E. termination there is a crater-row running at right angles to it. The light area appears to be bounded on the W. by a low curved bank.

William Rutter Dawes (19 March 1799 – 15 February 1868) was a British astronomer. Dawes was the son of William Dawes also an astronomer. Dawes was a clergyman who made extensive measurements of double stars as well as observations of planets. An optical phenomenon, the Dawes limit, is named for him.

The mystery of the TRIANGULAR STAR DISCS
- Page 576 in Mysterious Universe, a handbook of astronomical anomalies (1979) :