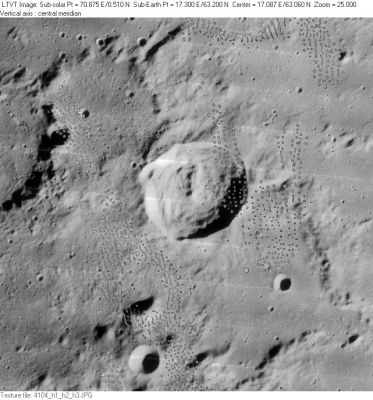 LO-IV-104H C. Mayer is in the center of this frame. 43-km C. Mayer H is to the northwest with identically-sized Archytas D partially visible along the margin. The rectangular-appearing C. Mayer D (containing 7-km C. Mayer F) is on the southwest. The circular crater at the bottom, below the two peaks, is C. Mayer E.

(IAU Directions) CHRISTIAN MAYER.--A prominent rhomboidal-shaped ring-plain, 18 miles in diameter, associated on every side, except the N., with a number of irregular inconspicuous enclosures. It has a central peak. Madler discovered two delicate short clefts, both running from N.E. to S.W., one on the E. and the other on the W. of this formation.