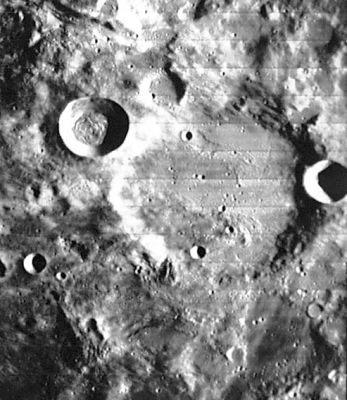 (IAU Directions) BYRGIUS.--A very irregular enclosure, about 40 miles in diameter, between Cavendish and the W. limb, with a lofty and discontinuous border, rising at one point on the W. to a height of 7000 feet above the floor. There are wide openings both in the N. and S. wall, and some ridges within. The border is broken on the W. by a crater, and on the E. by the well-known crater Byrgius A, from which a number of bright streaks radiate, mostly towards the W. One on the E. extends to Cavendish, and another to Mersenius, traversing the ring-plain Cavendish C. North-west of Byrgius there is a mountain arm which includes a peak 13,000 feet in height.