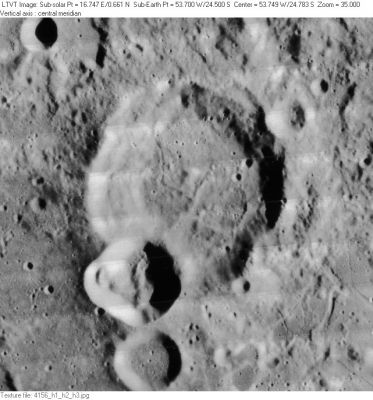 (IAU Directions) CAVENDISH.--A notable ring-plain, 32 miles in diameter, S.W. of Mersenius, with a prominently terraced border, rising at one point on the S. to a height of 6,000 feet above the interior, on which are a few low ridges. A large bright ring-plain (e), about 12 miles in diameter, breaks the continuity of the S.W. wall, and adjoining this, but beyond the limits of the formation, is another smaller ring with a central hill. There is also a bright crater on the N.E. border. The E. glacis is very broad, and includes two large shallow depressions. An especially fine valley runs up to the N. wall, to the E. side of e.