A wish for two kinds of locators has been expressed:


This page uses the libration zone crater Abel as an example, both to suggest some possibilities, as well as to point out some of the problems involved.

Here is an example of a simple Bowker and Hughes type locator map generated by asking the LTVT software to generate an aerial view of Abel on the VMA Shaded Relief background texture with a grid spacing of 30 degrees at a zoom of 0.5 (half normal scale). The software was then asked to identify and label the feature closest to the image center, with the result shown: 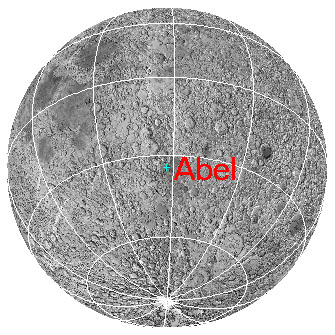 The chart would probably be more useful if some of the grid lines were labeled, but this is not something LTVT is set up to do (since an artistic placement of labels depends on the view and requires some human judgment). Nonetheless, it would be a fairly simple matter to automatically generate locator charts like this in a completely automatic fashion based on a simple list of features one wants to locate. Adding them to all the Wiki pages would be much more of an effort, unless Arb’s “14yo” (14-year-old) can invent a robot to do the task.

These formulas return results between -1 and +1 (relative to the center) which can be scaled to find the location on a circle of any other size. Plus is north and east. The formulas are the same for a circle viewed from the back, except that the sense of the X direction would be reversed. However, as you point out, foreshortening makes it impossible to distinguish features at the limb, so you really need six orthographic disks: front, back, east, west, north and south; as Rükl did in his Maps of the Hemispheres. The formulas for those circles are different, but equally simple. - Jim Mosher Nov 16, 2007

Developing an automated scheme to show in detail where the satellite features associated with a primary name are located brings up a number of problems:


Unfortunately the answer to both questions is no; meaning that in many cases a great deal of human effort is required to illustrate the meaning of the smaller feature names.

For producing a map showing the locations of the satellite features of a named feature, one solution might be to crop sections from Jennifer Blue’s USGS Digital Atlas. But two new problems arise:


The satellites of Abel illustrate both these problems. The primary named feature lies in LAC Zone 116, from which the following can be cropped: 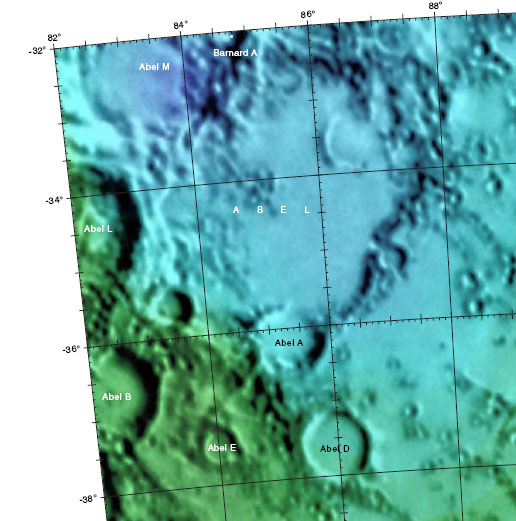 The problem here is that 3 of the 9 satellites fall in LAC Zone 115. Not only has the map not been released, but when it is, it will have a pie-shape (like Zone 116), but with the 82° meridian sloped in the opposite direction. So the two sections would have to shown separately. Also, as will be seen below, at least one of the remaining satellites is not clearly depicted on the Shaded Relief/LIDAR background.

A second possibility is to use LTVT to automatically plot the IAU Planetary Gazetteer positions on an enlarged section of something like the Abel Aerial Locator Map shown above. The problem with this is illustrated here, showing the result obtained plotting the IAU positions on the older USGS Shaded Relief texture used by the popular Virtual Moon Atlas: 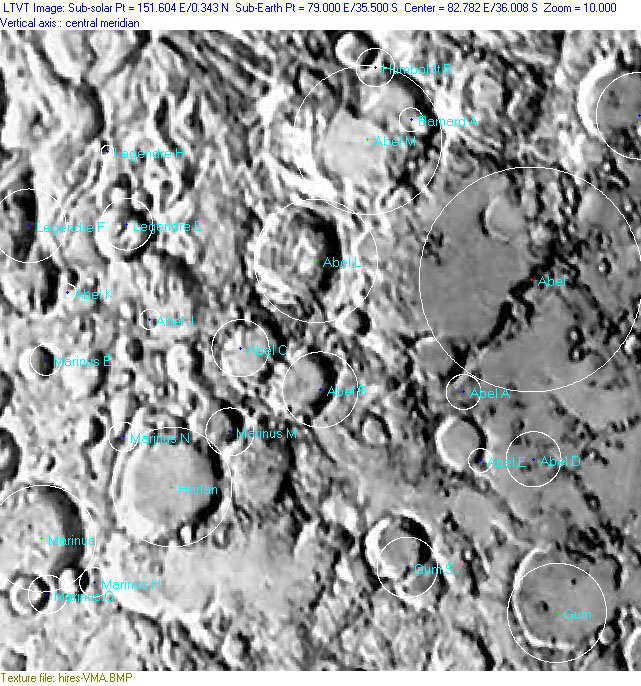 As Jennifer discovered, the locations of Abel A, D and E are badly misplaced from what would appear to be the intended craters. In the part she has not completed yet (on the left), the intention of Abel J and K is a bit uncertain.

As an alternative, one can try using the newer Shaded Relief background from PDS Map-a-Planet, which aside from the absence of the LIDAR coloration is identical to the background used in the Digital Atlas (see above): 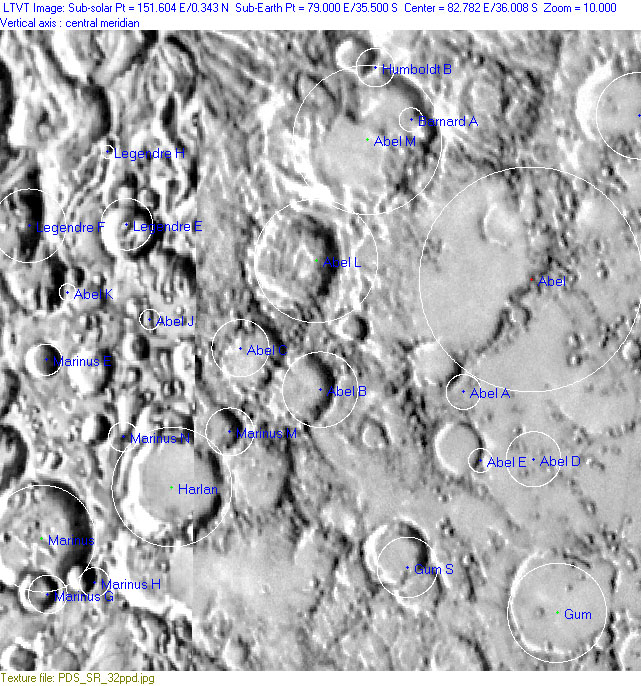 In some cases the PDS texture shows features differently, or in different locations, but in this particular area, aside from an altered shading, the differences are slight. Tentatively, one would think that Abel J refers (in the Shaded Relief maps) to the shadowed crater above and slightly to the right of the IAU position, and that Abel K refers to the crater to the left and slightly above the IAU position. As it happens, neither of these guesses may be correct.

Another possibility is using the Clementine basemap from PDS Map-a-Planet: 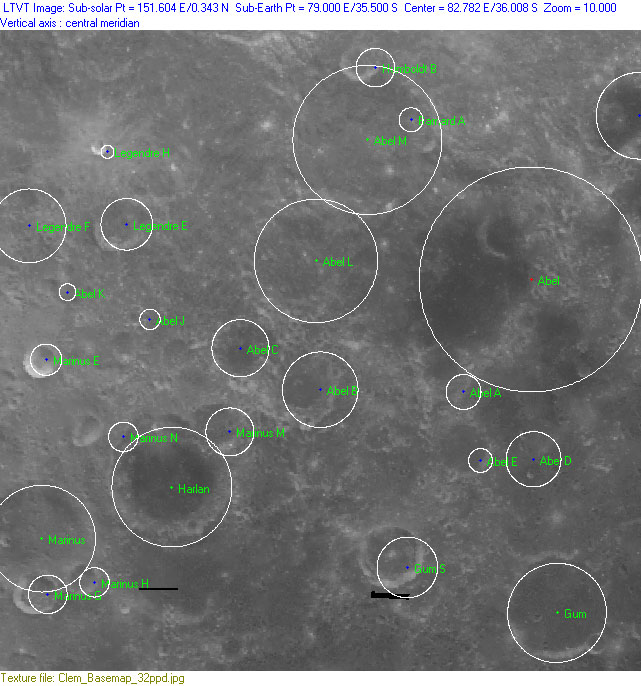 The problems with the Clementine texture are:


In this particular case the Clementine texture reveals a crater to the left of the IAU position for Abel K that does not seem to appear in the Shaded Relief. It seems an equally likely candidate for what might be meant by the name. Near Abel J the situation remains ambiguous.

In this particular case, yet another possibility is the medium resolution overview of this region captured by Lunar Orbiter IV (Frame 009M): 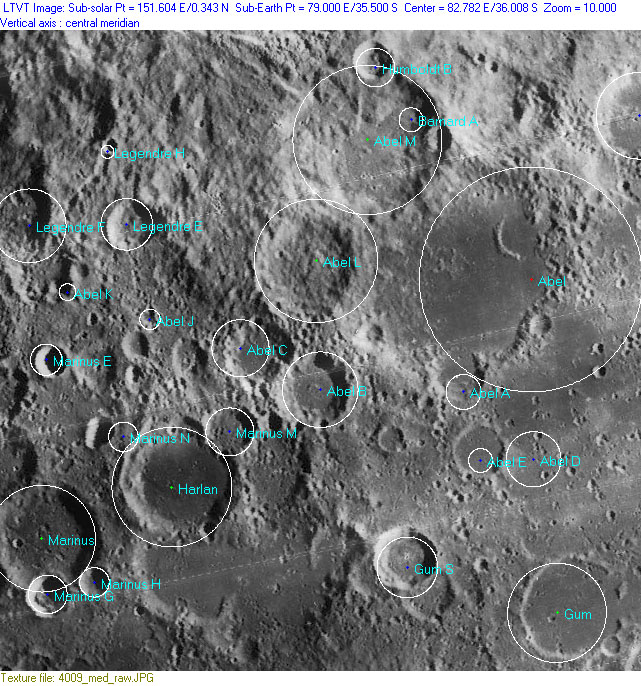 Like the Clementine basemap, this shows two craters near the expected position of Abel K and an irregular pit exactly at the stated location of Abel J. However, since Abel D and E were misplaced so badly, one might wonder if the name Abel J was not meant to refer to the much larger and more distinct unnamed crater below the IAU position?

To resolve these ambiguities, one might seek guidance from the System of Lunar Craters maps. These were plotted as south-up Earth-based zero-libration views, but with LTVT they can be rectified to an aerial view matching the previous illustrations. Here is a rectified version of A7: 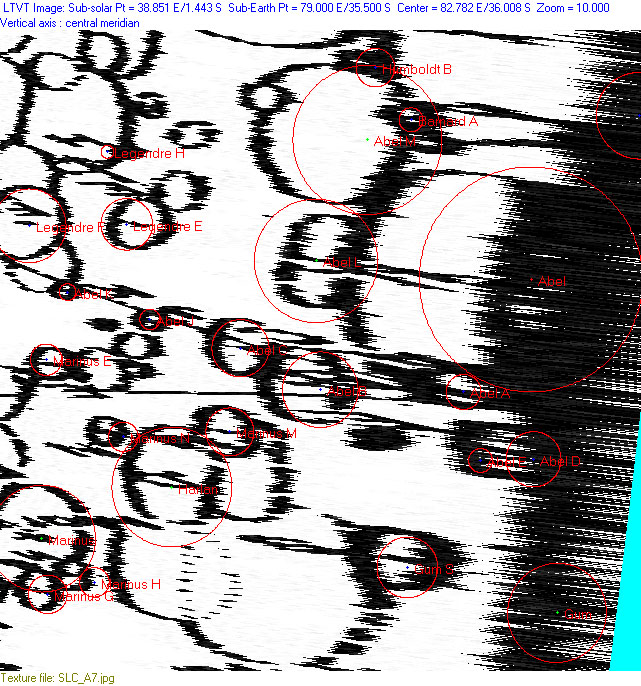 Once one gets over the rather garish appearance of the rectified view, it is apparent that the crater SLC crater circles match quite closely the pattern and positions revealed in the photo by Lunar Orbiter IV(blinking between the two is the best way to see this).

At the position of Abel K the SLC chart shows only one crater (the printed letter K on the chart is upside down and highly stretched in the rectified view), which happens to coincide well with the size and position of the lower of two revealed by Lunar Orbiter. At the position of Abel J (again the letter J on the chart is inverted and stretched), the intended feature is seen to correspond to the one suspected on the Lunar Orbiter view. The chain of larger craters below that was drawn (meaning, I believe, that those craters have LPL catalog numbers in the SLC), but they were not named.

Another possibility is to consult NASA SP-241, where what were thought to be the correct IAU named features were dotted on Lunar Orbiter images by NASA personnel. I have not had a chance to do this, or to see if it agrees with the present identifications.

In any event, the identity of Abel J and K seems to have been solved, but producing a clear rendition of what the names refer to requires a manual correction of the “dot file” (the positions and diameters) to match the actual features seen by LO-IV: 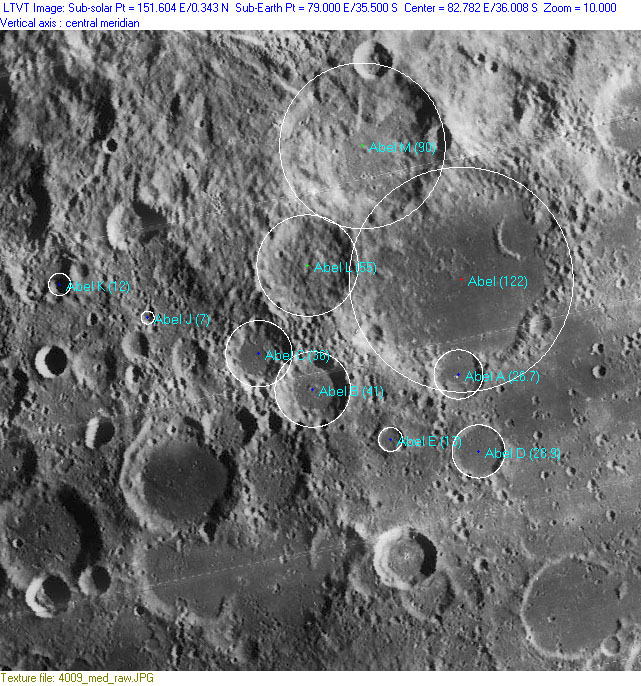 The dot file used was:

Note that LO-IV-009M shows a cluster of three craters at the location of Abel J, and since IAU names normally refer to single craters, it presumably was meant (in the SLC) to be the center one. Also note that some of the crater diameters differ significantly from those listed in the on-line IAU Planetary Gazetteer

This could perhaps be reduced to a Satellite Feature Locator Map like this: 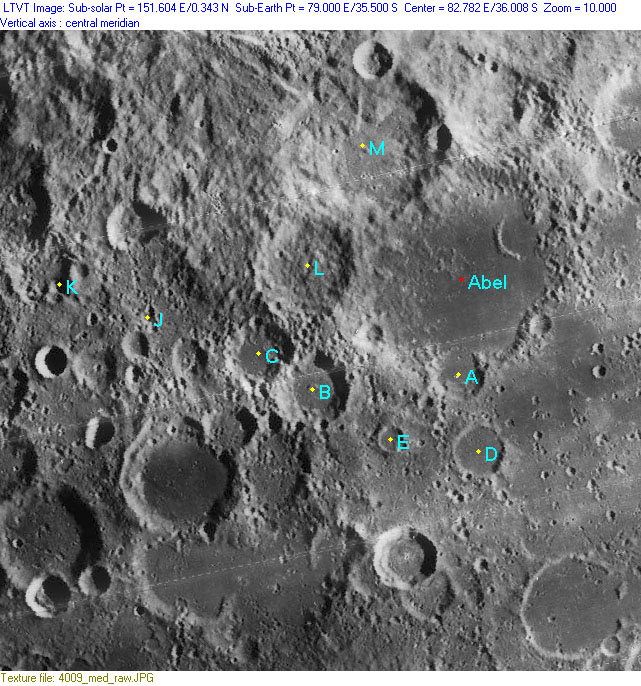 But, because of the amount of manual effort and human judgment involved, it is hard to see how this process could be automated.

Also, comparable wide angle Lunar Orbiter views with suitable lighting may not be readily available for many features one wishes to illustrate. The USGS has not scanned many of the LO-IV medium resolution frames, and, for unknown reasons, the new LPI Lunar Orbiter Photo Gallery – apparently quite complete for the other LO missions – does not seem to reproduce any LO prints that are not already on the USGS site.

So the problem arises of what to use as an accurate background on which to portray the satellite locations.

Yet another possibility (not illustrated here) is to use LTVT to generate an unlabeled aerial view of the area of interest using the PDS Clementine LIDAR texture. This would look the same as the USGS Digital Atlas LAC pages, but show the entire area in a single view. One could then manually dot and label the features in a program like Photoshop, using the USGS Digital Atlas LAC pages as a guide to the correct identification of the features on the LIDAR-shaded map.

Again, the problems are that the nearside USGS Digital Atlas has not yet been released, and the true terrain is not always accurately portrayed in the LIDAR-shaded background.