Difference between revisions of "Stadius" 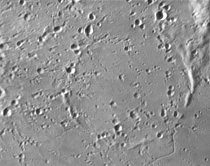 LPOD Photo Gallery Lunar Orbiter Images Apollo Images
Stadius was photographed during the missions of Apollo 15 and Apollo 17 (both from orbit). It might be an interesting pastime to try to detect the numerous craterlets of Stadius on orbital Apollo photos.- DannyCaes DannyCaes Sep 15, 2013.

This page has been edited 1 times. The last modification was made by - tychocrater tychocrater on Jun 13, 2009 3:24 pm - afx4
Retrieved from "http://the-moon.us/index.php?title=Stadius&oldid=9927"
Category: