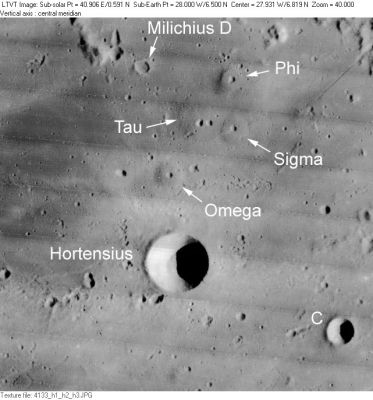 LO-IV-133H Hortensius is the classic flat-bottomed circular crater below center. The 7-km diameter circular crater in the lower right is Hortensius C, and one shallow 4-km crater in the upper left is named after Milichius, as shown. None of the domes, which have what appear to be volcanic caldera at their summits, are officially named, although on chart SLC E4 of the System of Lunar Craters (1966) they had the Greek-lettered designations shown. This cluster was unofficially called the Schlumberger domes. The "six domes" referred to by Phillips (1989) include the one to the west (left) of Omega and a difficult to see one (with no summit pit) to the east of Phi. He also regarded the structure on the groove to the east of this as a dome. Moore and Cattermole saw Phi and its companion-without-summit-pit to the east as a single heart-shaped structure (Phillips, 1989, Fig. 15).

(IAU Directions) HORTENSIUS.--This brilliant crater, about 10 miles in diameter, is remarkable for its depth, and as being a ray-centre surrounded by a nimbus of light. It has a central mountain, and Schmidt shows a minute crater on the outer slope of the S. wall. The former is a test object.