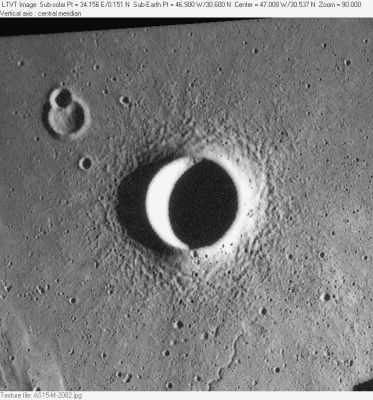 (IAU Directions) WOLLASTON.--A small bright crater on the Mare N. of The Harbinger Mountains, surpassed in interest by a remarkable formation a few miles S. of it, Wollaston B, an object of about the same size, but which is associated with a much larger enclosure, resembling a walled-plain, lying on the N. side of it. This formation has a lofty border on the E., surmounted by two small craters. The wall is lower on the W. and exhibits a gap. There is a central hill, only visible under a low sun. About midway between Wollaston and this enclosure stands a small isolated triangular mountain. From a hill on the W. runs a rill valley to the more easterly of a pair of craters, connected by a ridge, on the S.W. of Wollaston B.