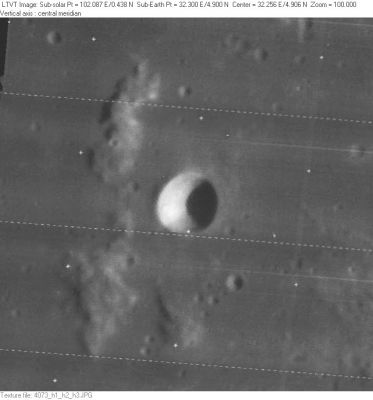 LPOD Photo Gallery Lunar Orbiter Images Apollo Images
- A small unnamed irregular depression east of Wallach (at 5° North/ 33°45' East) was the centre of attention in Apollo 8's Landmark Tracking Exercise. A series of orbital photographs were made of it, the best close-up photograph of this series is AS8-13-2300.
The first frames in this series of photographs (of Mare Tranquillitatis) show the surroundings of that irregular depression, while looking westward over the remains of crater Maskelyne F. Bowl-shaped crater Wallach is visible in the distance (of which frame AS8-13-2287 is the best one; it shows Wallach near the frame's right margin). The last photographs of this series show the same region looking east, toward the same Maskelyne F. Crater Wallach is not visible in these last frames, because of a disturbing solar reflection effect in the Hasselblad-camera's lens system.
Source of HiRes scans:
Apollo 8 Flight Journal (David Woods and Frank O'Brien).
Additional research Apollo 8 photography: Danny Caes