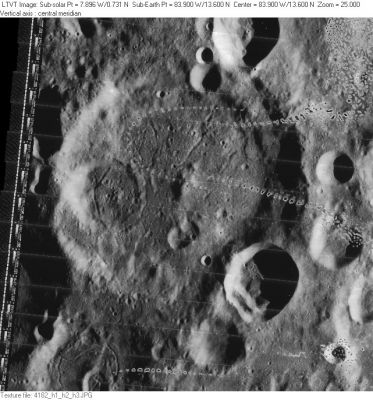 (IAU Directions) VASCO DE GAMA.--A bright enclosure, 51 miles in diameter, with a small central mountain. It is associated on the N. with a number of enclosed areas of a similar class, all too near the limb to be well seen.

Dom Vasco da Gama (1460 - December 24, 1524) was a Portuguese explorer, one of the most successful in the European Age of Discovery and the commander of the first ships to sail directly from Europe to India. As much as anyone after Henry the Navigator, Gama was responsible for Portugal's success as an early colonising power. Beside the fact of the first voyage itself, it was his astute mix of politics and war on the other side of the world that placed Portugal in a prominent position in Indian Ocean trade.
- Erroneously printed as Vasco da Gamma (one extra "m") on page 77 (libration chart 6) in the 21st Century Atlas of the Moon (2012).- DannyCaes Jan 23, 2013