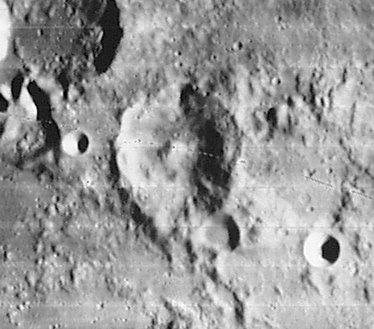 (IAU Directions) TAYLOR.--A deep spindle-shaped ring-plain, S. of Delambre, about 22 miles in length. The wall appears to be everywhere continuous, except at the extreme N. and S. ends, where there are small craters. The outer slopes, both on the W. and E., are very broad and prominent, but apparently not terraced. There is an inconspicuous central hill. On the E. is the irregular enclosure, already referred to under Alfraganus. Three or four short winding valleys traverse the N. edge of this formation, and descend to the dark floor. On the N.W. is the remarkable ring-plain Taylor a, 18 miles in diameter, rising, at an almost isolated mountain mass on the W. border, to a height of 7,000 feet above the interior. The more regular and E. section of this formation is not so lofty, and falls with a gentle slope to the dark uneven floor, on which there is some detail in the shape of small bright ridges and mounds. On the surface, N.E. of Taylor a, is a curious linear row of bright little hills. Taylor and the vicinity is better seen under low evening illumination than under morning light.

The central peak is 1.4 km tall. Two hills inside the crater, each less than 0.5 km tall, are promontories of the collapsed southern wall Sekiguchi, 1972. - fatastronomer