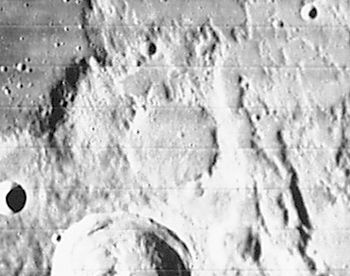 LPOD Photo Gallery Lunar Orbiter Images Apollo Images
- Close-ups of Sporer's floor are seen in Lunar Orbiter 1's frames 1145 and 1146 (in both frames, Sporer was captured near the lower margins).
- Sporer was also photographed by the north-looking metric/mapping Fairchild camera of Apollo 16. Frame AS16-M-0844 of REV 27 shows Sporer "to the right" (north) of the pronounced crater Herschel (at the frame's centre).
- Frame AS16-M-1408 of REV 37 shows about the same view as in frame AS16-M-0844, but... it was made much later in the lunar day.
- Research Lunar Orbiter 1 and Apollo 16 photography: Danny Caes

Friedrich Wilhelm Gustav Spörer (October 23, 1822 – July 7, 1895) was a German astronomer. He is noted for his studies of sunspots and sunspot cycles. In this regard he is often mentioned together with Edward Maunder. Spörer was the first to note a prolonged period of low sunspot activity from 1645 to 1715 known as the Maunder Minimum.