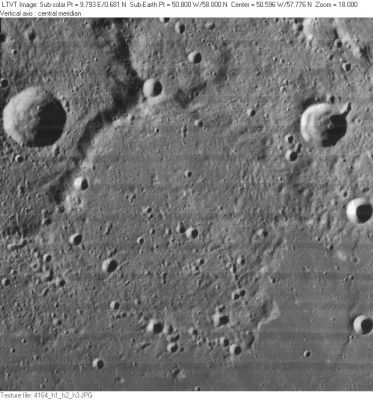 LO-IV-164H South is the vaguely bounded region of rough terrain in the center of the frame. To its upper right is 24-km Robinson, and to the upper left a small part of 143-km Babbage with 14 km Babbage C on its floor.

(IAU Directions) SOUTH.--On the E. and S., the boundaries of this extensive enclosure are merely indicated by ridges, which nowhere attain the dignity of a wall. On the N., the edge of a tableland intersected by a number of valleys define its limits, and on the W. a border forming also the E. side of Babbage. The interior is traversed by a number of longitudinal hills, and includes two bright little heights, drawn by Schmidt as craters.

The red spot in South
- Small reddish spot in South, observed by Maw on 15th June 1913. Source: V.A.Firsoff's The Old Moon and the New (1969), page 185.- DannyCaes May 19, 2012
- At the northwest end of South is a rugged plateau, on this Dr. W.H.Maw saw on 1913, June 15, when the plateau was on the terminator, a distinct small reddish spot, which became diffused into a patch as the terminator advanced. Source: Walter Goodacre's APPENDIX in T.W.Webb's Celestial Objects for Common Telescopes (Volume 1: The Solar System), page 163.- DannyCaes May 20, 2012