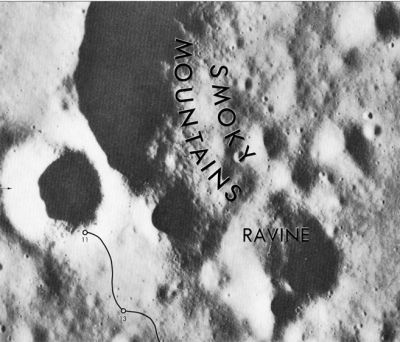 LPOD Photo Gallery Lunar Orbiter Images Apollo Images
- Although the name Smoky Mountains is not mentioned in the LPI's gazetteer, there are lots of Apollo 16 photographs of these mountains. In those days (april 1972) they were frequently Hasselblad'ed on B/W and color film by both CDR John Young and LMP Charles Duke.- DannyCaes Mar 21, 2012
- However, at the LPI there's a series of Apollo 16 photographs for a certain "Smoky MOUNTAIN" (do they know only one Smoky mountain at the LPI?).- DannyCaes Mar 21, 2012