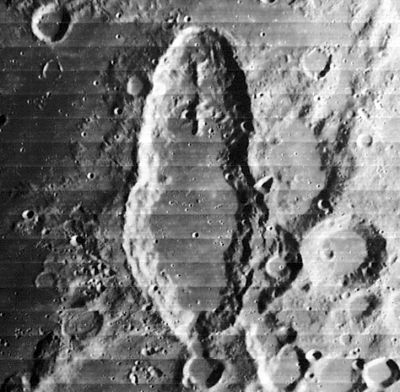 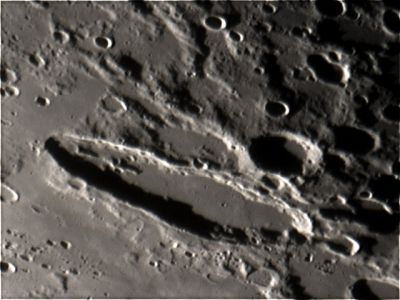 (IAU Directions) SCHILLER.--A fine lozenge-shaped enclosure, with a continuous but somewhat irregular border. It is about 112 miles in extreme length, and rather more than half this in breadth. The loftiest section of the wall is on the E., where it rises 13,000 feet above a considerably depressed interior. There is a bright crater on this side and some terraces. On the broad inner slope of the W. border, the summit ridge of which is especially well-marked, there is a large shallow depression. The floor contains scarcely any detail, except some ridges on the N. side and a few craterlets. The great bright plain W. of Schiller and the region on the S.W. are especially worthy of scrutiny under a low morning sun.

Julius Schiller (ca. 1580 - 1627) was a German astronomer and lawyer who like his fellow citizen and colleague Johann Bayer published a star atlas in celestial cartography.

Schiller's (and Bayer's) atlas, Coelum Stellatum Christiantum was published in 1627, the year of Schiller's death. It replaced Greek and pagan constellations with Bibilical images. The twelve figures of the zodiac became the Twelve Apostles, for example. The Linda Hall Library of Science in Kansas City, Missouri has a terrific collection of historical sky atlases and has created more than one permanent display of them. Their exhibit Out of This World: The Golden Age of the Celestial Atlas is worth getting to know. The index to the exhibit reads like a Who's Who of the Lunar 100 itself. Another first rate exhibit is of lunar atlases, called Face of the Moon: Galileo to Apollo. Julius Schiller was primarily an attorney, and a cursory search of the Internet finds not much about his life or motives in publishing his atlas, and clearly, it didn't "take."