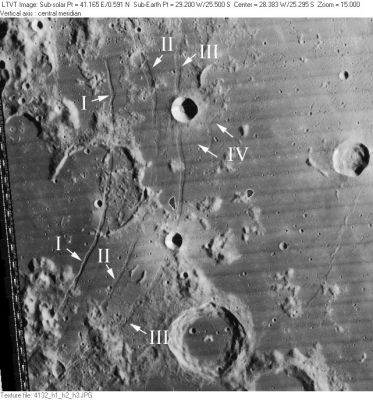 LO-IV-132H Hippalus is the low crescent of flooded crater rim to the left of center in this view which extends to König on the right and to Campanus / Mercator at the bottom. The Roman numerals are the Hippalus rille numbers recognized by the IAU in the System of Lunar Craters and LAC maps. Rima Hippalus IV is very difficult to see with this lighting. For an Earth-based view at almost the same sun angle, remapped to the same scale and orientation, but showing an area slightly more to the right, see the image by Paolo Lazzarotti.