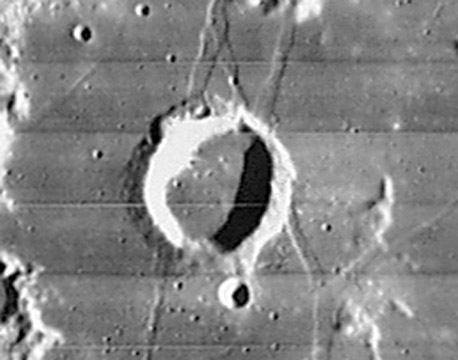 (IAU Directions) RAMSDEN.--This ring-plain, 12 miles in diameter, derives its importance from the remarkable rill-system with which it is so closely associated. Its border, about 1,800 feet on the E. above the outside surface, is slightly terraced within on the W., where there is an unrecorded bright crater on the slope. The two principal clefts on the S. originate among the hills W. of Capuanus. The more westerly begins at a crater on the N. edge of these objects, and runs N. to the W. side of Ramsden; the other originates at a larger crater, and proceeds in a N. direction up to a bright little mountain S.E. of Ramsden; when, swerving to the N.W., it ends at the E. wall of this formation. This mountain is a centre or node from which three other more delicate branches radiate. On the N., three of the shortest clefts pertaining to the system are easily traceable from neighbouring mountains up to the N. wall, which they apparently partially cut through. The W. pair have a common origin, but open out as they approach the border of Ramsden.

How He Does It (the Ramsden/ Marth sector, by Leo Aerts).