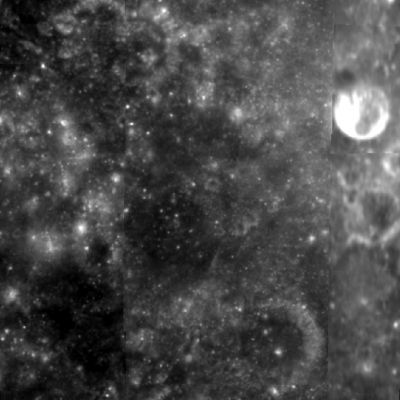 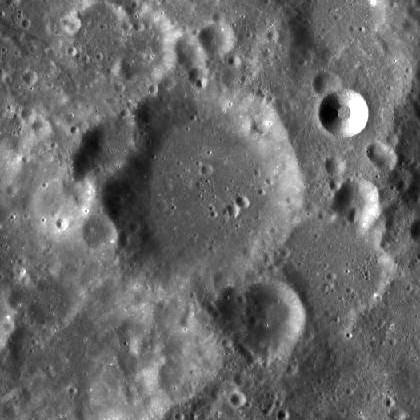 LPOD Photo Gallery Lunar Orbiter Images Apollo Images
- Apollo 10's orbital photographs AS10-33-4885, 4887 and 4890 show the bright unnamed ray-craterlet between Purkyne S (the LTO's "Milton") and Purkyne U (the LTO's "Tasso").
- Apollo 8's orbital photograph AS8-13-2331 is an oblique north-looking close up at the eastern part of Mare Smythii and the LTO's Milton (Purkyne S, at the frame's left margin) and Tasso (Purkyne U, central), and the bright raycrater in between Milton and Tasso.
- Frame AS8-13-2332 (also of Apollo 8) shows a good look at Purkyne S (Milton)(which is the large crater near the frame's right margin).
- Research orbital Apollo photographs: Danny Caes.
Note that the above mentioned bright raycrater (between Milton and Tasso) is depicted near the upper left corner of LAC 82 on page 164 of the Clementine Atlas of the Moon.
HiRes scan of Apollo 8 photographs: David Woods and Frank O'Brien (Apollo 8 Flight Journal).