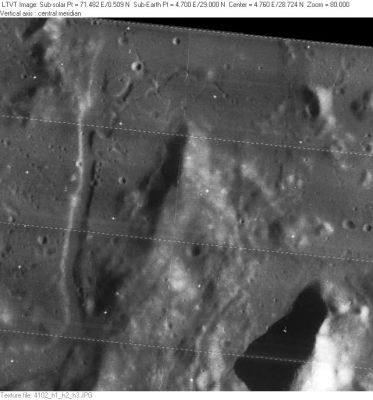 LO-IV-102H Promontorium Fresnel is the tip of the peninsula jutting up the center of the frame. The shadows suggest a height of about 770 m near the tip, increasing to the south. To its west is a small part of a roughly 2 km wide channel of Rimae Fresnel. The shadows suggests depths of up to 200 m. On the right-hand side of this image one can see the triangular shadow from an unnamed peak north of Santos-Dumont. The shadows indicate it has a height of about 3,000 m.