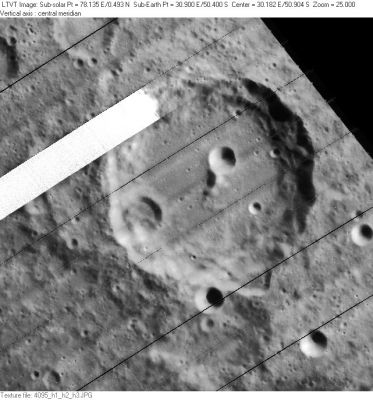 LO-IV-095H The sharp 10-km crater on the floor of Pitiscus (touching the central peak) is Pitiscus A. To its southwest (on the inner wall) is 13-km Pitiscus E. Still farther to the east, under the white blemish, is 24-km Pitiscus W. The 9-km bright-ray crater Pitiscus L is partially covered by the right margin. Due south of Pitiscus, the faint 43-km depression is Hommel H with 8-km Hommel HA at the position where its rim merges with Pitiscus. To the right of Hommel H is 11-km Hommel R. The only other IAU-named feature in this field is 25-km Pitiscus R, partially visible (to the left) along the top margin.

(IAU Directions) PITISCUS.--The most regular of the Vlacq group. It is situated on the N.W. of Hommel (a curious oblong-shaped enclosure, Hommel h, with a very attenuated W. wall, and a large crater on a floor, standing at a higher level than that of Pitiscus, intervening). It is 52 miles in diameter, and is surrounded by an apparently continuous rampart, except on the W., where there is a crater, and on the S.E., where it abuts on Hommel h. Here there is a wide gap crossed by what has every appearance of being a "fault," resembling that in Phocylides on a smaller scale. There is a fine crater on the N. side of the interior connected with the S. wall by a bright ridge. Just beyond the W. border there is a shallow ring-plain of a very extraordinary shape.

Can You Names These Craters