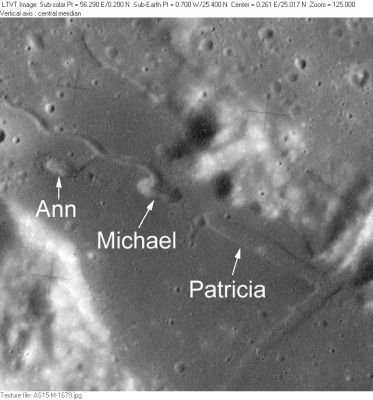 AS15-M-1679 The IAU-named minor features in this small part of the Apollo 15 Metric camera image are Ann, Michael and Patricia. The trough running perpendicular to Patricia in the lower right is a small piece of Rima Bradley. For named features in the area adjoning this on the left see Kathleen (which is attached to the same rille as Ann and Michael). The low-albedo region in which these three names are anchored seems to have been known as "Lacus Mozart ", shortly after the scientific mission of Apollo 15.