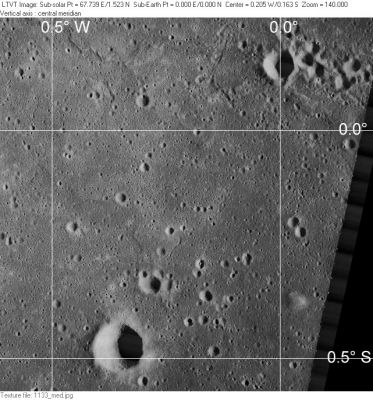 Oppolzer A is a rather ordinary 3.28 km diameter crater with a slightly raised rim, sloping walls and a small flat floor. It is notable primarily for being the closest IAU-named feature to the origin of the Mean-Earth/Polar lunar coordinate system -- the one most commonly used for expressing positions on the Moon. In this system, the zero-point of longitude and latitude is that point on the Moon which, on average, faces the Earth's center. Oppolzer A is slightly over 18 km (0.6 degrees) from that point, the next closest named feature being Bruce, which is about 37 km (1.2 degrees) on the opposite side of the mean center.