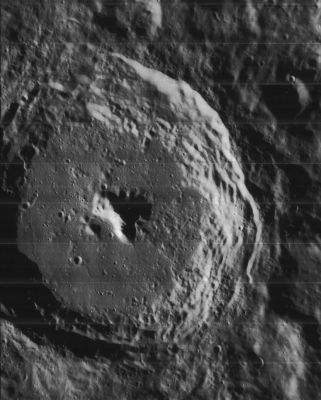 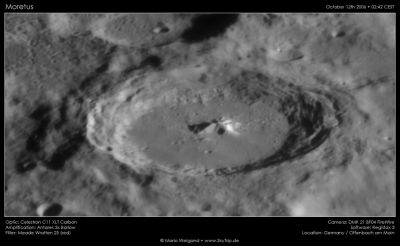 Left: Lunar Orbiter IV-130-h2 South-up overhead view. The small deeply shadowed crater in the upper right is 17-km diameter Moretus C.
Right: Mario Weigand The greater visibility of Moretus’ upper rim indicates that south is also up (and east to the left) in this Earth-based view. The shadowed crater above (south of) Moretus is Short.

LPOD Photo Gallery UAI Images Lunar Orbiter Images Southpole radar view, alphabetically arranged map: Part C (Moretus' northern half) and Part H (Moretus' southern half)
- Although it is not mentioned in the LPI's search-list of orbital Apollo photographs, the crater called Moretus WAS photographed during the mission of Apollo 15. It was captured near the lower part of the curved horizon in frame AS15-95-12988 (look for the crater with the central peak).
- Research: Danny Caes.

(IAU Directions) MORETUS.--A magnificent object, 78 miles in diameter, but foreshortened into a flat ellipse. Its beautifully terraced walls and magnificent central mountain, nearly 7,000 feet high, are very conspicuous under suitable conditions. The rampart on the W. is more than 15,000 feet above the floor, while on the opposite side it is about 5000 feet lower.

The Bottom of the World, Upside Down. Mountains Near the South Pole. Mountains at the Pole An Older Tycho Ring Eclipse On Top of the World A Scarp and a RilleNo Z (alphabetically arranged map of the moon's southpole region, Hi-Res radar view, including Moretus)