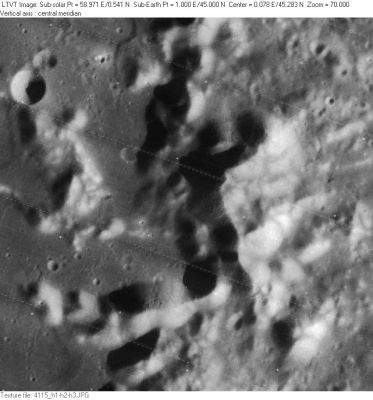 LO-IV-115H Mont Blanc is to the right of center, and the 5-km circular crater in the upper left is Alpes B. The direction of the sunlight is roughly parallel to the Lunar Orbiter scan lines. The summit of Mont Blanc is casting the longish shadow in the 10 o'clock direction. The location of the summit can be found by tracing back from the shadow tip in the reverse direction.

LPOD Photo Gallery Lunar Orbiter Images
Although there seems to be nothing in the LPI's Apollo Images Search for Mont Blanc and adjacent peaks in the Montes Alpes, there ARE orbital Apollo photographs of those peaks! For example: Fairchild-Metric image AS15-M-1538 which shows these peaks at the centre of the curved horizon! (north of Aristillus). Research Danny Caes.