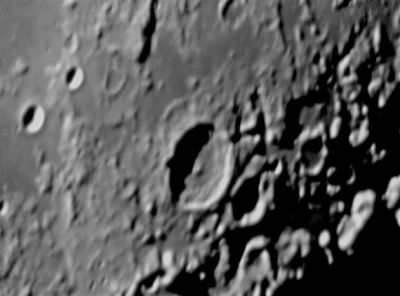 Peter Lloyd The crater Macrobius imaged on day 17.8 of the lunar cycle so the Sun was low in the western sky on this part of the Moon.

(IAU Directions) MACROBIUS.--This, with a companion ring on the E., is a very beautiful object under a low sun. It is 42 miles in diameter, and is encircled by a bright, regular, but complex border, some 13,000 feet in height above the floor. Its crest is broken on the W. by a large brilliant crater, and its continuity is interrupted on the N. by a formation resembling a large double crater, which is associated with a number of low rounded banks and ridges extending some distance towards the N.E., and breaking the continuity of the glacis. The E. wall is much terraced, and on the N.E. includes a row of prominent depressions, well seen when the interior is about half illuminated under a rising sun. The central mountain is of the compound type, but not at all prominent. The companion ring, Macrobius C, is terraced internally on the E., and the continuity of its N. border broken by two depressions. There is a rill-valley between its N.W. side and Macrobius.