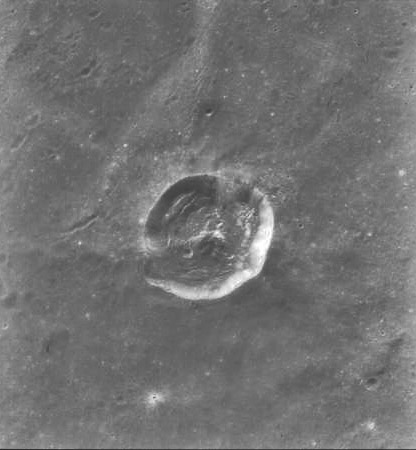 (IAU Directions) MADLER.--The interest attaching to this formation is not to be measured by its size, for it is only about 20 miles in diameter, but by the remarkable character of its surroundings. Its bright regular wall, rising 6,000 feet on the W. and only about half as much on the E., above a rather dark interior, is everywhere continuous, except at one place on the N. Here there is a narrow gap (flanked on the W. by a somewhat obscure little crater) through which a curious bent ridge coming up from the N. passes, and, extending on to the floor, expands into something resembling a central mountain. Under a high sun Madler has a very peculiar appearance. The lofty W. wall is barely perceptible, while the much lower E. border is conspicuously brilliant; and the W. half of the floor is dark, while the remainder, with two objects representing the loftier portions of the intrusive ridge, is prominently white. Under an evening sun, with the terminator lying some distance to the E., a very remarkable obscure ring with a low border, a valley running round it on the E. side, and two large central mounds, may be easily traced. This object is connected with Madler by what appears to be under a higher sun a bright elbow-shaped marking, in connection with which I have often suspected a delicate cleft. Between the obtuse-angled bend of this object and the E. wall of Madler, two large circular dark spots may be seen under a high sun; and on the surface of the Mare N. of it, a great number of delicate white spots.