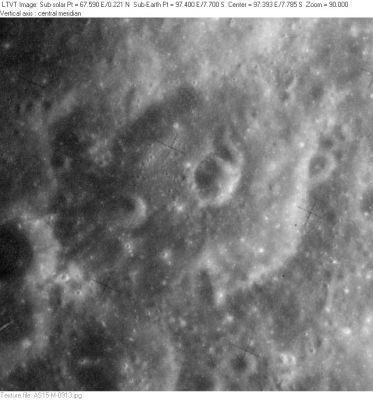 LPOD Photo Gallery Lunar Orbiter Images Apollo Images
- Orbital Hasselblad photograph AS8-17-2770, made during the mission of Apollo 8 in december 1968, shows Ludwig and its environs without shadows (scan photograph: David Woods and Frank O'Brien, Apollo 8 Flight Journal).
- AS12-55-8142, made during the mission of Apollo 12 in november 1969, also shows Ludwig, east-southeast of Hirayama.
- Apollo 15's panoramic ITEK-camera frames AS15-P-9699 and AS15-P-9704 show Ludwig and the small crater on its floor near the right margins of both frames (a little bit to the left of the high-albedo bowl shaped crater immediately north of Ludwig). Remember; north is to the right on all of the LPI's scans of the ITEK-frames! If you want to explore these online photographs together with the Clementine photographs in B.Bussey's and P.Spudis's Clementine Atlas, you have to hold this book upside-down!
- To detect the location of Ludwig at the very centre of Apollo 17's orbital panoramic ITEK-camera frame AS17-P-2857 is quite an adventurous performance (it's not a very easy crater!).
Research orbital Apollo photography: Danny Caes