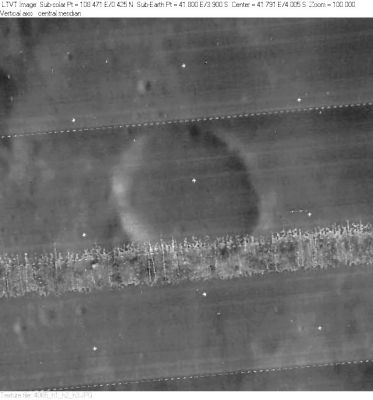 LPOD Photo Gallery Lunar Orbiter Images Apollo Images
- Oblique north-looking close ups of Lubbock were made during the mission of Apollo 16. Orbital ITEK-panoramic frames AS16-P-4480 and AS16-P-4485 show Lubbock's ring-like appearance near the right margins of both frames.
- Apollo 11's orbital photographs AS11-42-6309 and 6310 are almost identical-twin frames of the rille system near Lubbock H (the odd crater slightly below-right of both the photograph's centres). Note the very odd depressions and the catena-like (chain-like) rimae! This region is located slightly north of Lubbock itself.
Detection of the Lubbock H region on these two Apollo 11 photographs: Danny Caes, via chart 60 in the Times Atlas of the Moon and Lunar Orbiter 4 photograph IV-066-h1 (Lubbock H and its rilles are located near the lower margin of this photograph).
- Lunar Orbiter 1's frame 1052 shows Lubbock R (upper left corner) and NASA's Smokey Valley (below centre of frame).
- Research L.O. and Apollo photography: Danny Caes

(IAU Directions) LUBBOCK.--A brilliant little crater, about 4 or 5 miles in diameter, near the W. coast-line of the Mare Fecunditatis. The region W. of this object is particularly well worthy of scrutiny under a low sun, on account of the variety of detail it includes. On the S.W. run three fine parallel clefts, originating near the N. end of The Pyrenees.

Lubbock D, a crater west of Lubbock itself, shows an "extra internal rim" at the northwestern part of its inner slopes. - DannyCaes Aug 9, 2014