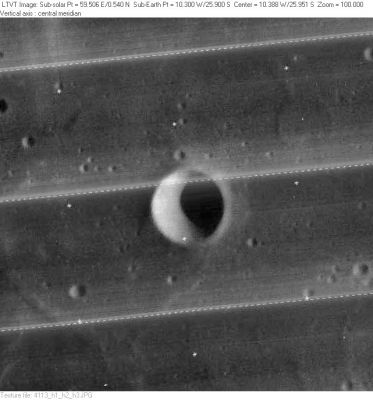 LO-IV-113H
Note the ghost-crater northeast of Lippershey.
Lippershey itself is located on the eastern part (or eastern corner) of a lozenge-shaped or square-shaped system of wrinkle ridges.

LPOD Photo Gallery Lunar Orbiter Images Apollo Images
- During the mission of Apollo 16 in april 1972, the small bowl-shaped crater Lippershey (in the southern part of Mare Nubium, and northeast of Pitatus) was one of the most southern (officially named) surface formations on the moon's near side which was photographed by the mapping/metric Fairchild camera in the exposed SIM-bay of A16's CSM Casper.
Frame AS16-M-2484 (of Apollo 16's REV 48) shows tiny Lippershey very near the central part of the curved horizon, and... the northern rim of the walled plain Pitatus (with surrounding hilly region of Mare Nubium's southern boundary) immediately AT the horizon!
- Research orbital Apollo 16 photography: Danny Caes.