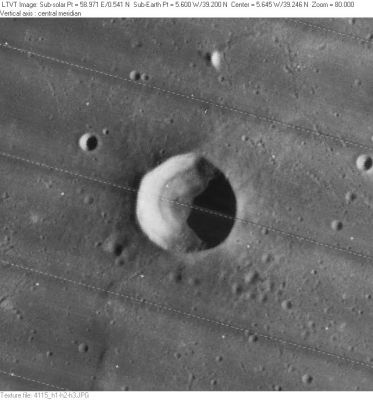 LO-IV-115H
Note the curious "pinnacle" just north of Kirch. This hillock was once a little mystery for the dedicated lunar observer Harold Hill (see his superb book A PORTFOLIO OF LUNAR DRAWINGS) (the Kirch case is described at the lower part of this page, below the Additional Information section).

LPOD Photo Gallery Lunar Orbiter Images
Although Kirch is not mentioned in the LPI's database for orbital Apollo photographs, this crater WAS photographed by the Fairchild mapping-metric camera of Apollo 15! One of those oblique north looking Fairchild frames is AS15-M-1544. In this frame, Kirch is visible a little bit below the most upper (and central) part of the curved horizon.
Research: Danny Caes

(IAU Directions) KIRCH.--A rather smaller object of the same class on the S.W.

Are there possible variations of brightness at the small (officially unnamed) hill immediately north of Kirch?

The LRO's close up of the small hill north of Kirch

Peaks, Swells and Ridges
Everything is Here (telescopic High Resolution photograph of Kirch and the small unnamed hillock north of it, by Christian Viladrich).

Now, here we have a real enigma, because there seems to be no online information about a certain Christian Kirch (although this astronomer is mentioned on page 96 of Mysterious Universe). Was the name Christian perhaps an error, and should it have been Gottfried instead? Gottfried Kirch was alive from 1639 to 1710, while Christian Kirch observed the illuminated nocturnal side of Venus in 1721 and 1726. Which means... both of them could not have been the same person.
Now, who was Christian Kirch?
In Mysterious Universe, he is mentioned as "First Astronomer of the Royal Academy of Sciences at Berlin".
It would be a surprise to detect the source-article of Kirch's anomalous Venus observations of 1721 and 1726 (Astronomische Nachrichten, No. 1586, vol. 1xvii, p. 27.).
Research: Danny Caes