Horrocks (on the floor of Hipparchus) 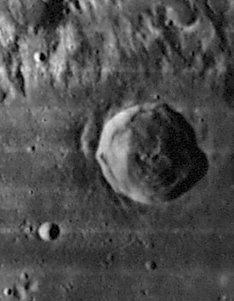 LPOD Photo Gallery Lunar Orbiter Images Apollo Images
During the mission of Apollo 16 in april 1972, a number of interesting oblique northward-looking Metric/Mapping Fairchild camera photographs were made of Horrocks. These photographs are: AS16-M-0835 to 0841 in Magazine REV 27, and AS16-M-1400 to 1405 in Magazine REV 37.
Horrocks was also captured on several frames made by Apollo 16's orbital panoramic ITEK-camera, such as: AS16-P-4632 and AS16-P-4639 (near the rightmost margins of both frames), and also AS16-P-5354 (near the rightmost margin).
Post-sunrise views of Horrocks were captured on Apollo 16's earlier ITEK-frames AS16-P-4588 and AS16-P-4593 (again: near the rightmost margins of both frames).
Research orbital Apollo 16 photography: Danny Caes

(IAU Directions) HORROCKS.--This fine ring-plain, 18 miles in diameter, stands on the N. side of the interior of Hipparchus, close to the border. It has a continuous wall, rising on the W. to a height of nearly 8,000 feet above the interior, and a distinct central mountain.

Jeremiah Horrocks (1618 – January 3, 1641), sometimes given as Jeremiah Horrox, was an English astronomer who made the first observation of a transit of Venus.

Layers of History Drawing A Little Bit about a Normal Crater