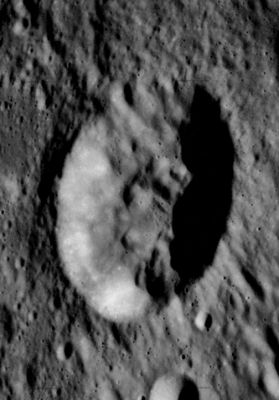 [Horrocks, Halley, and Hind may be regarded as strictly belonging to Hipparchus.]

AS12-51-7501 is "not just another" orbital Hasselblad photograph of crater Hind (in the upper right corner of this low-res LPI version). Although it was made through one of the small windows of Apollo 12's CSM Yankee Clipper, the most remarkable fact about this photograph is: it is the only Apollo-Hasselblad which shows the Lunar Module (L.M. Intrepid) surrounded by lunar background, instead of black space!
A medium-resolution version of this photograph shows LM Intrepid "below" the lunar horizon. There's also a King-Size Hi-Res version of this photograph, online in Kipp Teague's PROJECT APOLLO ARCHIVE.
Additional research: Danny Caes