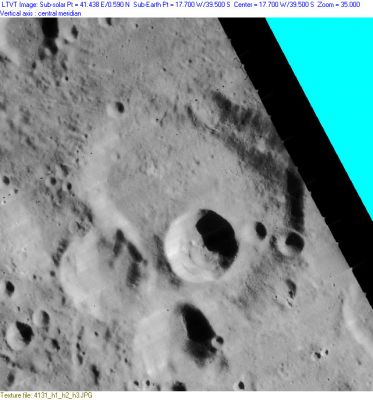 (IAU Directions) HEINSIUS.--A very curious formation on the N.W. of Tycho: a fine telescopic object under oblique illumination. It has an irregular but continuous border, except on the S., where two large ring-plains have encroached upon it, and a third, N. of a line joining their centres, occupies no inconsiderable portion of the floor. Heinsius is nearly 50 miles across, and the border on the E., is nearly 9,000 feet above the interior, which includes, at least, three small craters. The walls of the intrusive ring-plains have craters on their summits; the more easterly has two on the E., and its companion, one on the S.E. The ring-plain on the floor has a crater on its W. wall. Schmidt shows a small crater between the ring-plains on the S. border.