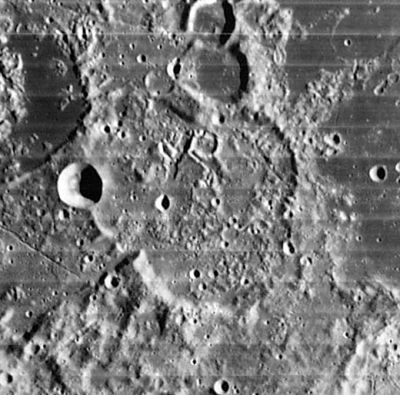 LOIV-189-H2 The IAU's Gerard is the complex, three-part enclosure in the center of this Lunar Orbiter view, which has north at about 11 o'clock. Directly above Gerard the dark-floored snowman shape consists of 27-km Gerard C and an unnamed crater above that. On the left, the sharp, deeply shadowed crater is Gerard A . The dark lava-flooded 60-km diameter feature partially visible in the upper left corner is one of two lettered craters known as Gerard Q. This one is officially called "Gerard Q Inner" to distinguish it from the much larger 190-km "Gerard Q Outer", which is more or less concentric with the former, and cuts through Gerard a little to the southwest of Gerard A, sharply truncating the "primary" crater's rim. The rille to the west of this point (to the lower left of Gerard A) is probably part of Rimae Gerard. The crater chain in the hills below it is not named.