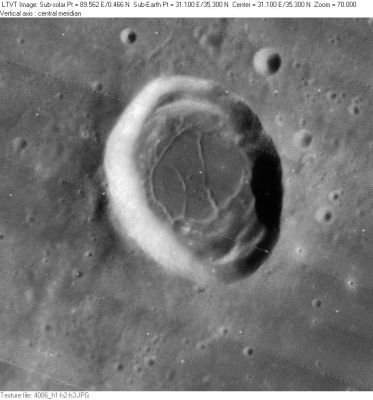 (IAU Directions) DANIELL.--A bright little ring-plain N. of Posidonius. It is connected with a smaller ring-plain on the N.E. wall of the latter by a low ridge.

A Very Strange Crater.
Give Truth a Chance

Daniell and Daniel
Who was the comet observer once known as Daniel? See page 236 in T.W.Webb's Celestial Objects for Common Telescopes, Volume 1; The Solar System, chapter COMETS (Dover 1962). See also page 311 in Volume 1 of Burnham's Celestial Handbook, about the variable star T Bootis, aka Nova Bootis 1860, very near Alpha Bootis (Arcturus), and a certain Daniel who was one of its many observers (who tried to detect it after it disappeared from view, forgood...) (a lost novastar).
Daniel is (I think) also mentioned in Volume 2 (The Stars) (of T.W.Webb's Celestial Objects), I have to explore each and every page of it...
Aha! Thanks to the German Wikipedia compilers I know more about our Daniel: Zaccheus Daniel, 1874-1964, American astronomer.
- DannyCaes Jul 24, 2015