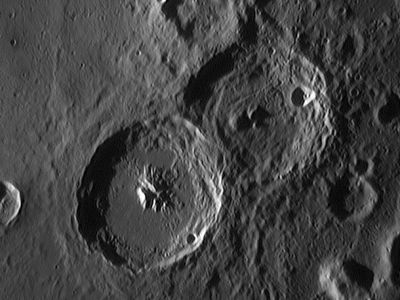 (IAU Directions) CYRILLUS.--The massive border of Theophilus partially overlaps the N.E. side of this great walled-plain, which is even more complex than that of its neighbour, and far more irregular in form, exhibiting many linear sections. Its crest on the S.W. is clearly inflected towards the interior, a peculiarity that has already been noticed in connection with Copernicus and some other objects. On the inner slope of this wall there is a large bright crater, in connection with which have been detected two delicate rills extending to the summit. I have not seen these, but one of the crater-rows shown by Schmidt, between this crater and the crest, has often been noted. The N.W. wall is very remarkable. It appears to be partially wrecked. If observed at an early stage of sunrise, a great number of undulating ridges and rows of hillocks will be seen crossing the region W. of Theophilus. They resemble a consolidated stream of "ropy" lava which has flowed through and over the wall and down the glacis. The arrangement of the ridges within Cyrillus is very noteworthy, as is also the triple mountain near the centre of the floor. The fine curved cleft thereon traverses the E. side, sweeping round the central mountains, and then turning to the south. I have only occasionally seen it in its entirety. There are also two oblong dark patches on the S. side of the interior. The S. wall of Cyrillus is broken by a narrow pass opening out into a valley situated on the plateau which bounds the E. side of the oblong formation lying between it and Catherina, and overlooking a curious shallow square-shaped enclosure abutting on the S.E. side of Cyrillus.