Crocco lies some 800 kilometres away west from the central region of the South-Pole Aitken Basin -- a 2500 kilometre-wide basin; and north-east of the 325 km-wide Planck Basin -- both of the pre-Nectarian period (~ 4.6 to 3.92 bn years). The crater is somewhat a contrast in parts; its western sector suffering little impacts of note allowing for landslide and terraced features to develop, while the crater's eastern sector has been impacted by several major events. The most prominant of these is Crocco G which not only has obliterated any semblance of Crocco's original rim there, but also imparted a large amount of impact-material onto the floor. A portion of this material has subsequently been impacted to the west -- producing a crater about half the size of Crocco G -- where its northern section has been intruded by lava deposits underneath (perhaps, through surface cracks in Crocco itself). The lava-flooded floor is very much of rele
vance into the history of the crater as a whole, as signatures of the above dynamic events indicate a short history in between each occurence. - JohnMoore2 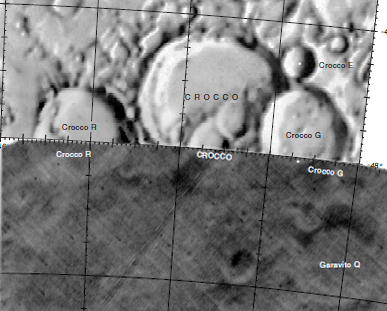 LAC 90 view. Excerpt from the USGS Digital Atlas of the Moon.