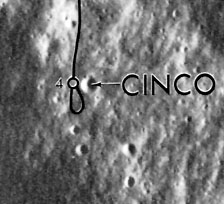 Apollo 16 Site Traverses Chart The name refers to a cluster of five craterlets, not just the one labeled. These five were called Cinco a, b, c, d, and e. The largest of them (Cinco a) is the most northern one of the five. See labeled photograph in section Additional Information below.

LPOD Photo Gallery Lunar Orbiter Images Apollo Images Because Apollo 16's Geology Station 4 was located immediately westward of the largest one of the five Cinco-craterlets (the most northern one of them), its shadowed eastern inner slope should be visible on eastward looking photographs made by both CDR John Young and LMP Charles Duke.
- DannyCaes Nov 1, 2016
Southward view from Spook crater (Station 2) which shows the cluster of the five Cincos on the slope of Stone Mountain (source: ALSJ).