Bullialdus - and its two companions (Bullialdus A and B)

(IAU Directions) BULLIALDUS.--A noble object, 38 miles in diameter, forming with its surroundings by far the most notable formation on the surface of the Mare Nubium, and one of the most characteristic ring-plains on the moon. It should be observed about the time when the morning terminator lies on the E. border of the Mare Humorum, as at this phase the best view is obtained of the two deep parallel terrace valleys which run round the bright inner slope of the W. wall, of the crater-row against which they abut on the S.W., and of the massive E. glacis, with its spurs and depressions. The S. border of Bullialdus has been manifestly modified by the presence of the great ring-plain A, a deep irregular formation with linear walls, which is connected with it by a shallow valley. The rampart of Bullialdus rises about 8,000 feet above a concave floor, which sinks some 4,000 feet below the Mare on the W. With the exception of the fine compound central mountain, 3,000 feet high, there are few details in the interior. On the S., is the fine ring-plain B, connected with the S.W. wall near the crater-row by a well-marked valley, and nearly due W. of B is another, a square-shaped enclosure, C, with a very lofty little mountain on the W. side of it, and a crater on its S. wall. In addition to these features, there are many ridges and surface inequalities, very prominent under oblique illumination.


The yellowish/reddish coloration of the central peak of Bullialdus 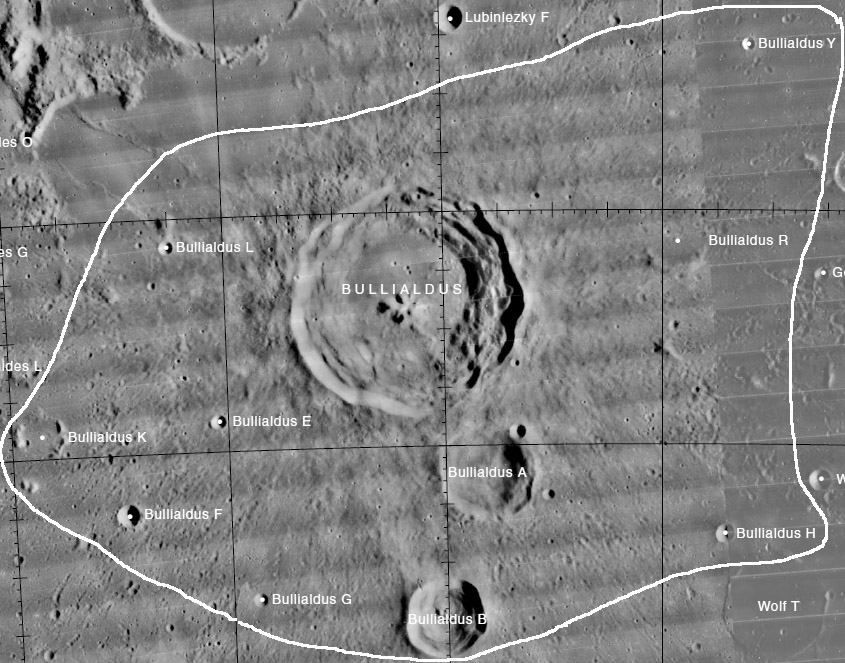