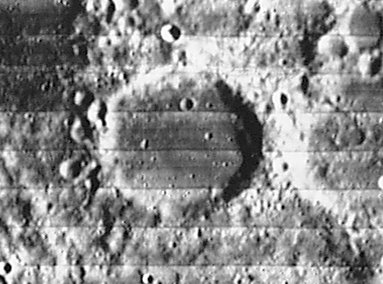 LPOD Photo Gallery Lunar Orbiter Images
The distinct ray-craterlet Buch B, north-northwest of Buch itself, is a noteworthy telescopic target during Full Moon. In this region of the moon's southern cratered surface, the tiny ray-craterlet Buch B stands out as a very fresh looking formation, partly because of it's system of both bright and dark rays. Although it was not made during Full Moon conditions, the Lunar Orbiter 4 photograph of Buch and Buch B shows a little bit of Buch B's ray-system. See: LOIV-95-h2.
Research: Danny Caes
See also LPOD More Highland Plutons (Buch B during Full Moon), and Whitewashed! (very distinct!).

(IAU Directions) BUCH.--Adjoins Busching on the S.W. It is about 31 miles in diameter, and has a less broken barrier. There is a large crater on the W. wall, and another smaller one on the S.E. Schmidt shows nothing on the floor, but Neison noted two minute crater-cones.