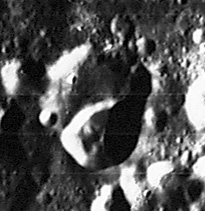 Lunar Orbiter IV Brown is the roughly circular crater at center. The fresher oblong one that overlays it on the south, forming a double crater, is 22 km Brown E.

Who was Miss Brown?