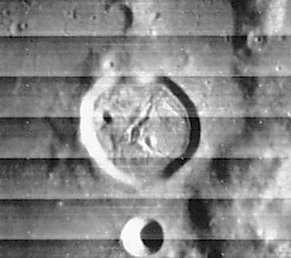 LOIV 065 H2
Note the system of rilles on Bohnenberger's floor.

(IAU Directions) BOHNENBERGER.--A ring-plain about 22 miles in diameter, situated on the E. side of the Mare Nectaris, under the precipitous flanks of the Pyrenees, whose prominent shadows partially conceal it for many hours after sunrise. The circular border is comparatively low, and, except on the N., continuous. Here there is a gap, and on the E. of it an intrusive mass of rock. From its very peculiar shadow at sunrise, the wall on the W. appears to be very irregular. The club-shaped central mountain is of considerable size, but not conspicuous. S. of Bohnenberger stands the very attenuated ring, Bohnenberger A. It is of about the same diameter, has a large deep crater on its N. rim, and a smaller one, distinguished with difficulty, on its S.W. rim. On the N. of Bohnenberger there is a bright little ring-plain connected with the formation by a lofty ridge, under the W. flank of which Schmidt shows a crater-chain. An especially fine cleft originates on the W. side of this crater, which, following an undulating course over the Mare Nectaris, terminates at Rosse, N. of Fracastorius.